The Next Generation of Conservationists are on their way!!!

Chastity who is 12 and attends Staple-Motley Secondary School in Minnesota, USA could be the model for future conservationists, her love for animals and the desire to help them is honourable.
In a very recent interview with Earthzoo her answers were refreshing and her ideas inspiring...
Earthzoo... what is your favourite animal?
Chastity..... " I love all of them I don't have just one favorite" " Most people have one favorite animal but how can you choose one when there are so many"
Earthzoo... What would you like to see on the website?
Chastity... "I would like too see on the website more educatoinal things about the animals and to also see how too treat animals when they are injured."
Just two of the answers but what a refreshing change to the norm.
We salute you chastity and we will do all we can to help and support you on your journey into the future with your dream of helping the animal kingdom and it's environment.
Too often Young people Like Chastity are overlooked, ignored or not encouraged but without them we are doomed to failure. The world of Conservation is like a relay race, people like us here at Earthzoo are running as hard as we can but there will come a time when our legs or minds wont take us any further and we will have to hand over the batton of survival over to the Next Generation and thats you Chastity Runge-Badger, you. So get ready, study hard, work hard and get ready for that Batton and when you get it then Run Like The Wind

Every Animal Deserves a Chance

Although the obvious focus for the Cheetah Conservation Fund (CCF) is Cheetah every animal that needs help is given it as and when we can. an example of this was a wild young male Jackal we found injured on-site. 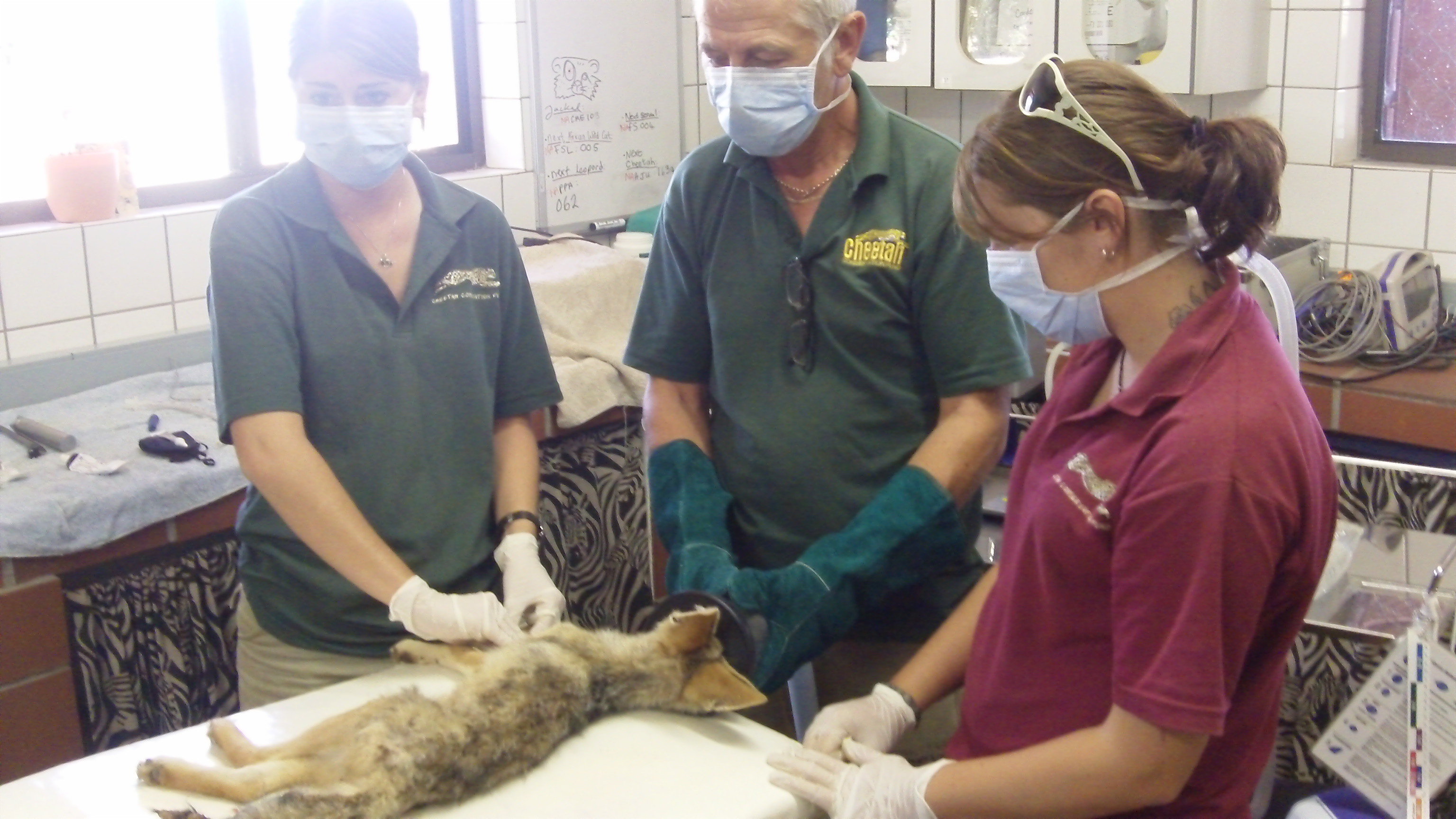 Unfortunately this little guy was beyond help and we didn't manage to save him, his hip and hind leg were way beyond repair so we didn't allow him to come out of the Anaesthesia. Sad but at least we gave him a chance of help and we will again with any wild animal that needs our help.

The use of livestock guarding dogs is not a new idea.  Guarding dogs have been used successfully in the countries around the World for thousands of years to protect livestock from predators. However, as these predators were almost wiped out in many countries, the use of dogs to protect livestock declined.  With conservation efforts, many predator populations are increasing again and spreading into former home range areas.

In the situation is similar.  Predators, such as the cheetah, have always been on the farmlands together with free ranging game.  In order to protect small stock against these predators, various methods can be applied, including the use of livestock guarding dogs.

Guard dogs are raised from six to eight weeks of age with the species they are to protect for their lifetime. .  If a dog does not form a bond with its livestock it will not feel protective towards them, or be motivated to remain with them.  If a dog has bonded well with a herd or flock, it will remain with those livestock for the rest of its working life. 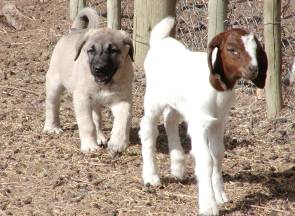 Diversity is the key to success in Conservation

CCFs activities are not just limited to cheetahs and their research and reintroduction, but also include environmental restoration and livelihood development. CCFs region is known for a high density of cheetahs but is also infested with native-species thornbush, known as encroachment, and the problem is staggering when you travel the region: more than 26 million hectares are encroached with between 2,000 to 10,000 kg of bush per hectare.

Due to overgrazing, wildfire suppression, and reduction in natural grazers, commercial farmland in north-central Namibia is encroached by several thornbush species: Acacia mellifera, Acacia reficiens, and Dichrostachys cinerea, with relative densities depending on soils and rainfall. Bush encroachment is exacerbated further by overgrazing, which decreases farm value. The problem has been recognized by the Namibian government and there are several initiatives to find cost-effective land restoration methods.

The invasive thornbush species are dense hardwood with a heating value similar to coal. They burn cleanly with little smoke  perfect for campfires and cooking, or power generation on an industrial scale. If a business can successfully utilise this energy it becomes a triple bottom line corporation: land restoration, job creation and business profitability.

CCF Bush (pty) Ltd is the entity responsible for research and demonstration of this business. Thornbush on CCF land is harvested, chipped and transported to a factory, where it is compressed into wood briquettes. The product, "Bushblok, is aimed at the braai (barbecuing) market as there are no chemicals or additives and it burns cleanly with high heat. It is differentiated from firewood by being denser, drier and more consistent.

To maintain social and environmental standards, CCF Bush is certified by the Forest Stewardship Councils principles for responsible harvesting. The criteria are similar to Fair Trade and include ensuring indigenous rights, maintaining pollution controls and compliance with domestic and international labour laws. We are proud to say our product is FSC 100% from well-managed forests!

At the current scale of operations, more than 30 Namibians are employed in skilled and semi-skilled positions. The amount of bush on CCF land guarantees a decades-long harvest schedule before needing to return and harvest an area again. Different harvest techniques and machinery are being trialled for various combinations of capital, rate of harvesting, and job creation.
CCF Bush is a direct conservation connection to the cheetah: predators struggle to hunt in dense thornbush and risk severe eye damage when chasing prey. When the savannah is restored to the natural habitat, the predators can resume their natural hunting style. By encouraging and supporting bush clearing initiatives, CCF Bush contributes to cheetah conservation in Namibia.
Earthzoo is proud to be a part of this logical and very worthwhile project.

Earthzoo Has decided to work in Namibia, initially for about 3 months helping in all areas of the Cheetah Conservation Fund.

CCF is a great Charity that is world famous for its tireless work securing the existence of the Cheetah in the wild. it's both a rescue and rehabilitation centre but also works with the local communities, farmers and businesses setting up practical, workable and mutually beneficial projects.

We will post updates, photographs, news and information as often as possible.

WHF continues it's Support of UWEC

Since 2009 when WHF and Paradise Wildlife Park Sent Zara and Bisa, Two Lionesses to Uganda as part of the Lions to Africa Project Both have been supporting their upkeep and the work of the centre.
WHF's and EarthZoo's Brian is pictured Presenting a cheque for £5000 to James Messingussi UWEC's executive Director.
Brian has returned many times to both check on the two Lionesses, support the work of UWEC physically and tour local Schools and colleges giving talks and guidance on various conservation projects.

SUmatran tiger cubs at whf are doing really well. At nearly 4 weeks old they are weighing 4kg each

The Next Generation of Conservationists are on their way!!!

Youngsters Like Chastity Runge-Badger from Staples, Minnesota, USA are the key to the worlds future. their passion and love for the world of nature is the only way so many species will survive.
Read more...

Every Animal Deserves a Chance

At the Cheetah Conservation Fund Every Animal gets help and attention when it needs it.
Read more...

The Simple majesty of a Cheetah makes me breathless as the perfect design works like dream.If you love cats I think you'll be amazed at this magical film
Read more...